The NB-IoT network consumes only about 180 kHz of bandwidth. Using the License frequency band, three deployment methods such as in-band, guard band, or independent carrier can be used to coexist with the existing network. Can be directly deployed on GSM, UMTS or LTE networks to reduce deployment costs and achieve smooth upgrades.

The NB-IoT network consists of NB-IoT terminals, NB-IoT base stations, NB-IoT packet core networks, IoT connection management platforms, and industry application servers. The access network architecture of NB-IoT is the same as that of LTE.

The development of NB-IoT business scale is closely related to the bearer business model, and its applicable scenarios are "small traffic, reporting-oriented, long-term sleep, power consumption sensitive, low mobility" applications. In order to realize the large number of low-power devices carried by the NB-IoT network, the most important technologies are: PSM and eDRX

In this mode, the radio frequency of the terminal is turned off, which is equivalent to the shutdown state, but the core network side still retains the user context. When the user enters the idle state / connected state, there is no need to attach the PDN to establish it.

It is suitable for services with no delay requirements for downlink data; terminal equipment has low power consumption and uses battery-powered methods, such as meter reading services. 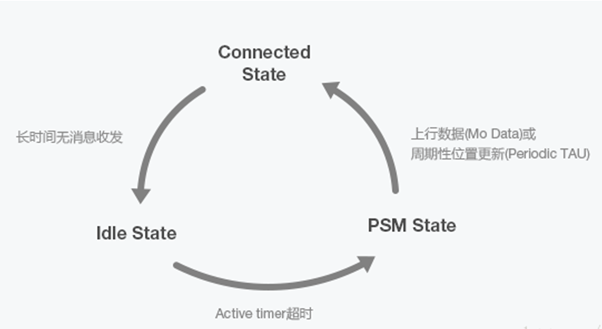 The terminal equipment takes into account both low-power consumption and services with certain delay requirements. In each eDRX cycle, the terminal can receive downlink data only within the set paging time window, the rest of the time the terminal is in a sleep state and does not receive downlink data. This mode can achieve a balance between downlink service delay and power consumption, such as remotely shutting down the gas service.

Within each eDRX cycle, there is a paging time window (PTW). The terminal monitors the paging channel in the PTW according to the DRX cycle (the DRX cycle time is short, the terminal can be considered not to sleep and always reachable) in order to receive downlink Data, the rest of the time the terminal is dormant. The eDRX mode can be considered that the terminal equipment is reachable at any time, but the delay is large. The delay depends on the eDRX cycle configuration, which can achieve a balance between low power consumption and delay.

Due to the short DRX cycle (1.28s, 2.56s, 5.12s, or 10.24s, which is determined by the operator's network settings and depends on the APN service handled by SIM), it can be considered that downlink services are always available and the delay is small. It is suitable for services that have high requirements on delay, but the power consumption is relatively high. Terminal equipment generally uses the mains power supply method.

First time network access latency: After the NB-IoT terminal is turned on, the terminal has a lot of message interaction with the network (authentication, channel establishment, IP address allocation, etc.). It takes 6-8s to complete network access and obtain an IP address Used for later data transmission.

Data reporting and reception latency: After the NB terminal is successfully connected, when the terminal has data transmission, the terminal will actively establish a wireless connection with the base station (no authentication, IP address allocation and other processes are required at this time). Then send the data immediately. The delay of data reporting by the terminal is closely related to the state of the terminal and the wireless network coverage.

The low-power consumption mechanism of the NB application is inseparable from the configuration of the SIM card operator. Therefore, when purchasing SIM cards, please be clear about the APN business you handle. Different APNs are suitable for different application scenarios.

If you have any problem about how to choose APN business, please ask Tuya stuff.

The NB-IoT network consumes only about 180 kHz of bandwidth. Using the License frequency band, three deployment methods such as in-band, guard band, or independent carrier can be used to coexist with the existing network. Can be directly deployed on GSM, UMTS or LTE networks to reduce deployment costs and achieve smooth upgrades.

Tuya is providing developers with MCU SDK that can be quickly programmed .This is a development kit generated automatically from the product’s function datapoint according to Tuya Serial Port Communication Protocol. MCU engineer can develop this procedure conveniently on this basis. This article will introduce you to the specific steps of MCU development.

After the product is created, users can select functions, panels, modules and firmware according to the actual needs of the product, and download the corresponding MCU development kit.

Creating a product is described in detail in the MCU Access Guide, so we won't go into details here.

When selecting module on the platform, the platform will recommend some common module models. After selecting the module and firmware, you can purchase module samples online.

The hardware engineer can enter the drawing board stage, and the related materials for hardware development can be viewed in the developer center:

Note: The peak working current of the NB-IoT universal module will reach more than 300mA. Be sure to leave a margin when designing the power supply.

After getting the module, you don't need to write code first, first determine whether the module is working properly. Using the module debugging assistant (MCU simulation mode) provided by Tuya to cooperate with the module can perform network config operation, verify the module and be familiar with the protocol interaction process at the same time, and the development and debugging efficiency will be greatly improved later.

Tuya MCU simulation debugging assistant can simulate MCU data transmission and reception. Set up the minimum system of the module and connect the serial port to the computer. The assistant has the following functions: 1. Pair with a networked module and verify that the module is working properly. 2. Before the MCU completes development, debug the App panel display. 3. When the MCU developer does not know how to send and reply data to the module, the data of the simulation assistant can be used as a reference.

Note： After the NB-IoT module is powered on, it will continuously send heartbeat packets. After receiving the correct response, it will perform subsequent initialization protocol interactions. If no data is sent after power on, please check if the peripheral circuit of the module is correct. 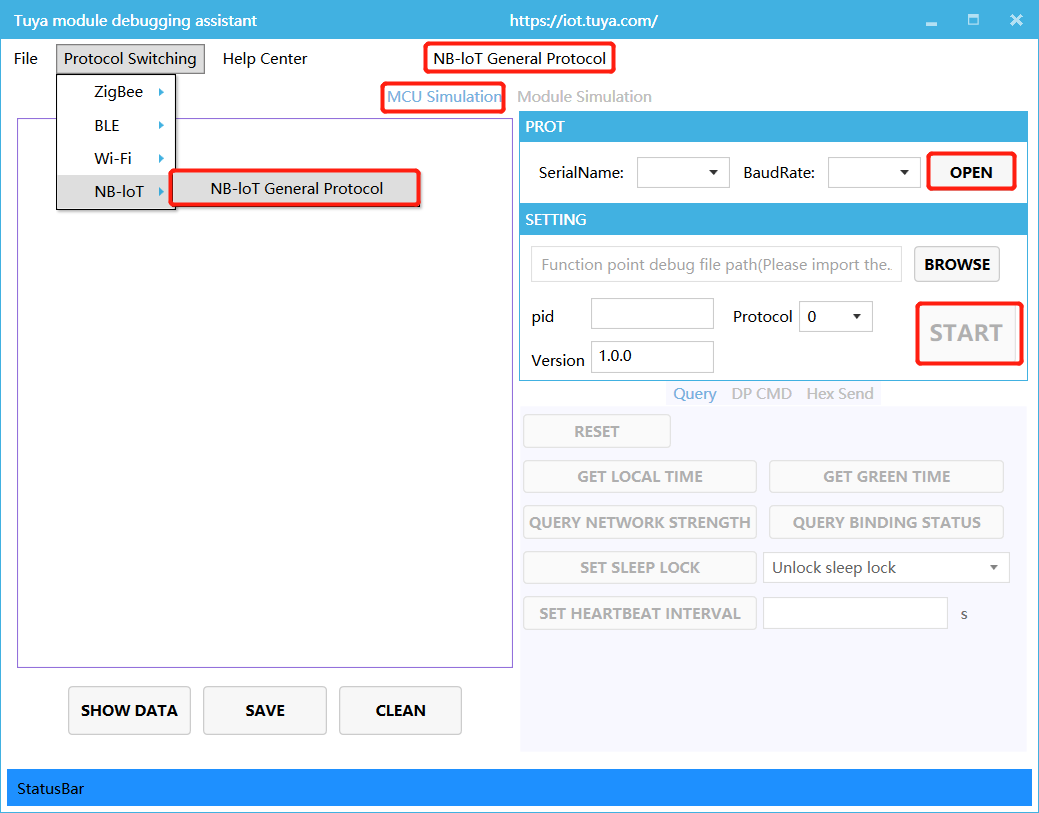 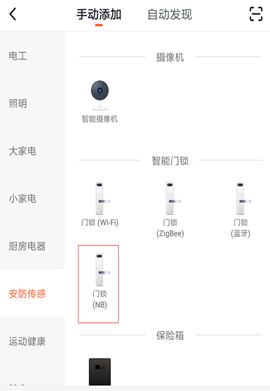 Note: NB-IoT QR Code is generated and printed by Tuya productions Tools. You can ask staff for details.

During hardware debugging, you can see that the module and the MCU have a series of serial protocol interaction data. For the data analysis part, users can refer to the protocol document in the development kit. The agreement is mainly divided into two parts: the basic protocol and the functional protocol.

The functional protocol part is mainly based on the reporting and issuing command words of the basic protocol, and details the format of the Datapoint content. The full content of the basic protocol, the document center is kept updated in real time, you can click the link to view: Tuya Cloud NB-IoT Universal Serial Port Access Protocol.

There are two ways for the MCU to connect with the Tuya module protocol: transplant the MCU SDK or connect the protocol by yourself.

After porting the MCU SDK code development, you can use the Tuya module debugging assistant - module simulation mode to verify the correctness of the MCU code. The usage method is similar to the MCU simulation mode. In the simulation module mode, the assistant will automatically send the initialization data stream to verify that the MCU response is correct and give corresponding prompts for the incorrect data. After the initial interaction is passed, you can manually click to test other extended functions.

Note： module simulation mode do not supply network functions, only used to verify the correctness of the MCU serial protocol transmission and reception. After the test is completed, the MCU can be connected to the actual module and test the network.

Tutorial for Tuya Support Center：Tuya provide online technical support, you can ask any questions like the question about documents here.

FAQ：FAQ, you can read it before developing to avoid some problem.